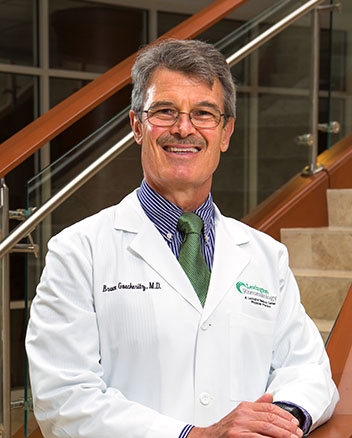 University of Tennessee, College of Medicine

Dr. Goeckeritz obtained his medical degree from the University of Tennessee College of Health Sciences in Memphis and completed his internal medicine residency at Dwight David Eisenhower Army Medical Center in Augusta, Ga. After completing a rheumatology fellowship at Walter Reed Army Medical Center in Washington, D.C., he practiced as an Army physician for 11 years, serving the last two years as a staff physician at Walter Reed and as a researcher at Uniformed Services University in Bethesda, Md.

Dr. Goeckeritz established Lexington Rheumatology in September 2009. Before starting the practice, he was an associate professor in the Department of Medicine, Rheumatology at the Medical College of Georgia from 2001–2009. During the last four of those years, he also served as program director for its rheumatology fellowship program. He now has three partners at Lexington Rheumatology.

A Fellow of the American College of Rheumatology, Dr. Goeckeritz earned certifications from the National Board of Medical Examiners in 1989, and the American Board of Internal Medicine in 1997 (rheumatology). He has also published numerous articles pertaining to rheumatology and immunology.

Dr. Goeckeritz is a native of Delaware. His last name, which is pronounced “Gek-er-itz,” is of Germanic origin.